Exceptionally tight clearance issues are no problem for pumps in massive plant expansion.

Almost everyone in concrete pumping today has their share of captivating stories about their most challenging projects: the biggest pour, the highest pour, the longest pour, the most intense mix design, their most demanding client, and so on. Thanks to a project just south of St. Paul, Minn., Cemstone, working as a concrete pumping subcontractor to Northland Concrete and Masonry (NCM), will now be able to add “lowest overhead clearance pumped” to their list of bragging rights. On a plant expansion project in Cottage Grove, Minn., the company pumped beneath structural steel beams a mere 10’ overhead. To put that in perspective, 10’ is also the regulation height of an NBA basketball hoop, it’s the ceiling height of most new homes, it is shorter than a vintage VW Beetle standing on end — you get the picture. They did so through the use of a pair of Schwing pumps with four/five-section Double-Z booms and were able to deliver an impressive 1,000 cubic yards in less than six hours. Obviously, when these companies get down — they get down.

Film Producer
The pairing of Cemstone and NCM on the Up North expansion project brings together two mainstays in Upper Midwest construction. Offering a century and a half of cumulative experience, they’re tackling a job that is equal parts standard fare and unique challenges.

“Up North is a manufacturer of agricultural plastics and construction film and is the largest manufacturer of private-label plastic bags for retail stores,” said Brad Streeter, NCM’s project manager. “The company, already one of the city’s largest employers with a staff of more than 200, is nearly doubling its facility size by adding more than 425,000 sq. ft. to its existing footprint of 450,000 sq. ft. It is expected that the size of the workforce will double as well — great news for the local economy. We started work in July of last year with footing pours and foundation wall work in advance of the slab on grade.”

Low Beam Action
The interior slab on grade was, in itself, an impressive effort: 425,300 sq. ft. of slab, varying in thickness from 6” up to 16” with concrete volumes placed exceeding 9,300 cu. yds. Individual segments that were completed ranged from 8,000 to 75,000 sq. ft. in a single pour. However, it was neither the size nor the volume of the pour that proved most impressive in that facet of the job — it was the overhead clearance that prompted Cemstone to tap its creative side.

“The ceilings in the structure were generally around 27’ tall,” said Pat Gagnon, Cemstone’s concrete pumping foreman. “That’s plenty of room for most pumps or ready-mix truck to operate in. However, there is one section in which the ceiling drops down to 13’ and several areas in which structural beams reduce that overhead clearance even further to just over 10 feet. We’ve been in some tight spots before, but I can honestly say that is about as close an area as we ever can be in with a pump.”

The pair of pumps Cemstone called upon for that part of the pour were a Schwing S 20 and S 31 XT, which feature four-section and five-section booms, respectively. Each machine’s boom consists of short sections which don’t require a lot of overhead space to unfold. For example, the S 20, has a four-section Double Z boom with a total of 820 degrees of articulation with 270 degrees at both the third and fourth sections. Most importantly, however, the pump offers an unfolding height of just 12’ 8” — ideal for use in the 13’ section of the structure. Its counterpart at this site, the S 31 XT, features a five-section boom with 15’ 3” of telescoping capability and unfolds in only 18’ 8” of clearance — again, a perfect fit for conditions at the Up North site.

“On that pour, we positioned the 31-meter pump out in the section with the 27-foot ceilings and then had him boom underneath the low clearance beams, utilizing the telescoping section to access harder-to-reach areas,” said Gagnon. “The 20-meter pump, on the other hand, was able to sit in the 13-foot tall section, unfold right there and boom out into the work area beneath the ultra-low clearances. It could not have worked out better.”

Columnus Interruptus
It’s worth mentioning that, with columns placed every 20 feet or so, Cemstone had to repeatedly stop pumping, pull the boom in, move down a bit and begin pumping again. “It was a tough pour, but we completed that 1,000 yard, 12” thick slab pour in 5 ½ hours,” said Gagnon. “It really went well, even with all that movement.”

Asked about any possible options they might have had for pumping under those conditions, both Streeter and Gagnon agreed there simply was no effective alternative.

“While we could have added 4” hose to the system, doing so is extremely tough on the guys and it is prone to plugging up — we avoid using slickline whenever we can,” said Streeter. Added Gagnon: “There was really no other way to get that done — there isn’t even a belt truck that would be able to operate with such a low clearance. Fortunately, we had the ideal solution to meet that challenge and it proved itself.”

It’s Pouring Outside
The pumping action at Up North’s site was not limited to interior pours — far from it. NCM and Cemstone tackled more than 445,000 sq. ft. of 6” and 8” thick paving on the exterior of the new building. In fact, most everything around the new manufacturing facility was either paved or would serve as an area to support structures integral to the manufacturing process.

“The biggest part of the exterior pumping operation was 445,000 sq. ft. of 6” and 8” thick paving with #4 rebar at 24” on-center,” said Streeter. “Even though, this is a huge job site with plenty of room to maneuver, we did get into one area where we could have been forced to rely on a single ready-mix truck backed in at a time. Because my guys wanted two trucks suppling concrete at all times, Cemstone had the 61-meter positioned to place the concrete but then had a 36-meter pump — with two trucks backed up to it — feeding the larger pump. It sped things up, kept production levels high and really minimized the risk of cold joints. It was a nice solution, for sure.”

To ensure all areas of the massive surface had the proper slope for drainage collection, NCM used a Somero Model SXP screed, equipped some new technology of its own.

“We recently purchased Somero’s 3-D Profiler System which, working in conjunction with a robotic total station, ensures that the screed is creating slopes that are accurate and reliable — the first time,” said Streeter.

Mass Production
Essentially doubling the size of the manufacturing facility meant also having to add storage for its raw materials — plastic pellets which are melted down, extruded and turned into Up North products. To do so, the company is adding 16 silos which, when erected, will stand between 64- and 97-feet tall, about 20 feet higher than the current ones. To create an area sufficient in strength to support 16 full silos, meant having to pour a series of massive support pads. According to Gagnon, collectively, the mat slabs measured almost 27,000 sq. ft., were 4’ to 6’ thick and were done in four pours.

“Each pour consisted of 1,200 to 1,500 yards of a challenging mass concrete mix design,” he said. “Mass concrete is engineered with a very specific plan for how to be batched, how to be poured, and how to be cured, in order to maintain a specific temperature gradient. In this case, we were dealing with a slag mix, which, as a rule, is not known for its pumpability. But the pumps — an S 46 SX and an S 47 SX — performed well and, in fact, outperformed expectations. NCM was shooting for production rates in the 80 to 100 cu. yd. per hour, per pump range. But on the silo pad, we probably got 150 yph. It’s a tougher material but the pumps ate it right up — no issues at all.”

Production levels were not hurt by the fact that Aggregate Industries’ batch plant was located in Newport, Minn., a mere ten-minute drive from the Up North site.


Mutual Admiration
According to Streeter, by project’s end, the new Up North facility will contain nearly 1,000 tons of rebar and more than 28,000 cu. yds. of concrete, most of which will have been pumped by Cemstone. He says their two companies work together frequently, which lends a certain level of familiarity to the effort.

“We use Cemstone a good deal and enjoy working with them,” he said. “In many cases, we buy ready mix from them, we use them for pumping and they also have a contractor supply division that we utilize quite a bit as well. They are like a one-stop shop for us.”

Gagnon shares those sentiments, citing the level of communication between the two companies — even in advance of a shared-project — as invaluable.

“Northland is a great customer for us,” he said. “So, anytime we get involved in a project together, we try to get in there, right up front, whenever possible. The things you never want on a job site are surprises — working together helps ensure there are none. That low-clearance situation could have been disastrous, instead it was just another day at the job — all because we knew what to expect and met it with the right solution.”

Work is expected to wrap up at Up North by July 2020 with a tentative opening date of Fall/Winter 2020. 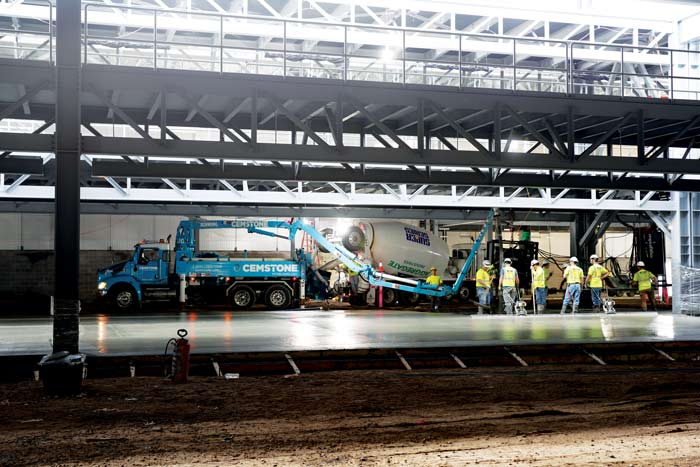 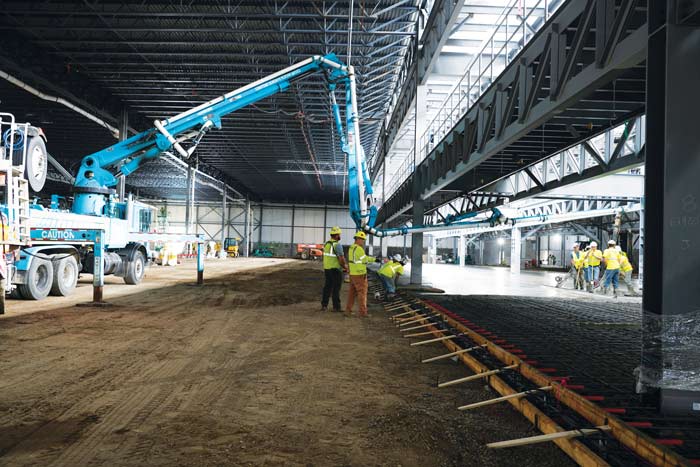 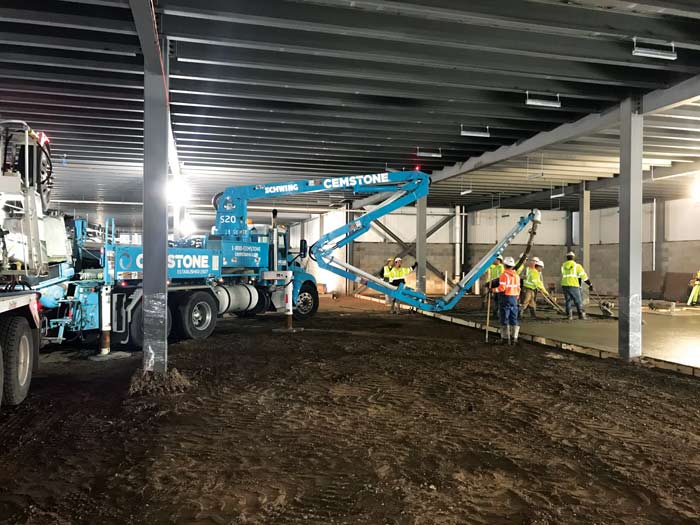 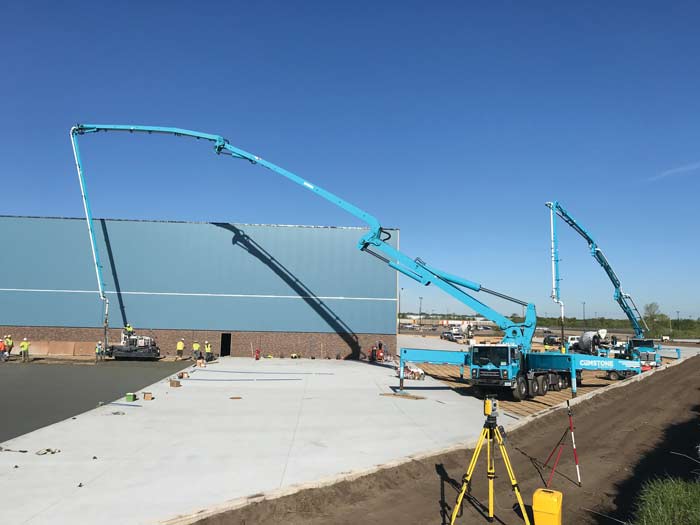 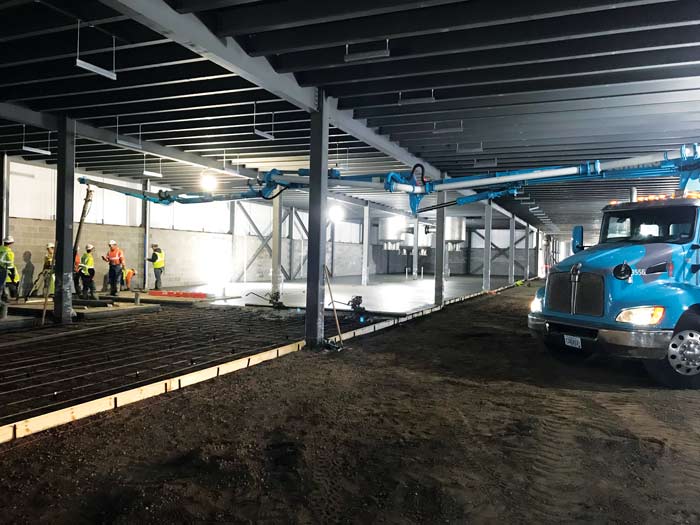 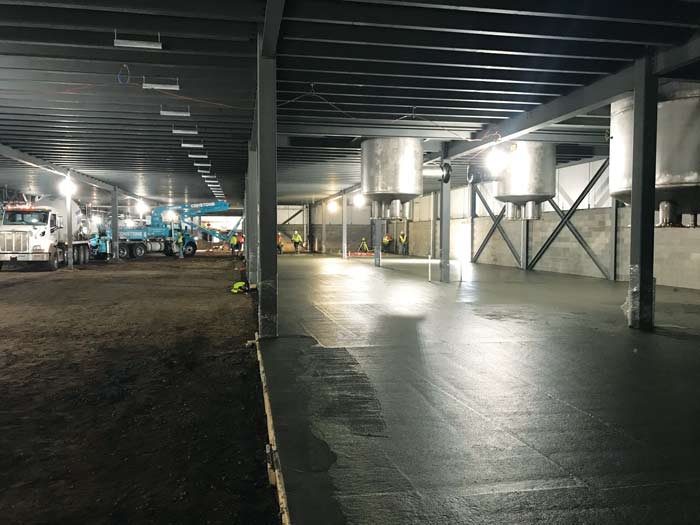