There’s little denying that concrete pumps are adept at delivering massive volumes of concrete to huge, sprawling projects — it’s in their DNA. However, a pump’s value is perhaps even more keenly felt on job sites in which size constraints, difficult access and ongoing trades work regularly conspire to make a contractor’s life miserable. It is in that latter scenario that Ryan Companies US, Inc. has found itself, as it heads up construction of a project called “Eleven,” a high-rise condominium in downtown Minneapolis. Wedged between three existing structures and a parkway, the project has thrown Ryan its share of concrete delivery challenges, most of which were answered with equally innovative pump solutions. Approaches that, on a scale of one to ten, might rate . . . an eleven.

Roots in Wood
Started in 1938 by James Henry Ryan and his son Francis as a lumber and coal provider, the company expanded into the construction arena where it quickly flourished. Today, with offices in 11 states, Ryan Companies employs more than 1600 people, and has annual revenues in excess of $2 billion. According to Chris Lehman, Ryan’s director of construction for self-performed work, the company has established itself as a nationwide leader in commercial real estate services.

“Our collective expertise in all facets of design, development, construction, real estate management, building services and capital markets lends itself perfectly to delivering complex projects like ‘Eleven’,” he said. “In addition to being the co-owner, developer and architect, we are also self-performing the full scope of the structural concrete work, leveraging a dedicated team of concrete professionals to help deliver this design/build project. At 44 stories, plus the crown above, this will be the tallest residential structure in Minnesota reaching nearly 550’ at its peak. The design includes an eight-story, 205’ x 170’ podium that will provide parking, commercial space and a host of amenities such as a swimming pool, workout room, spa, etc. The structure backs off to 130’ x 110’ at the start of the residential tower at Level 9 and is further reduced to 80’ x 70’ at Level 44, the mechanical roof. The first residential tower in the Twin Cities to be designed by a world-class architecture firm (Robert A.M. Stern Architects), the tall, lean, architectural precast, stone and glass structure will contain some 36,000 cu. yd. of concrete and 3,500 tons of rebar.”

Situated alongside the Mississippi River, Eleven will offer premium, spacious, condominium life with no more than five residences per floor, and some of the best views in downtown Minneapolis — overlooking the city’s famed Stone-Arch bridge, St. Anthony Falls, and Gold Medal Park — and located adjacent to the city’s world-famous Guthrie Theater. While the living spaces will be undeniably spacious, the available work area needed to construct the structure was anything but. That issue would be resolved, however, through a combination of solid logistical planning and innovative technology.

Station Breaks
The first and perhaps the most telling sign of the value placed on work area at the Eleven site can be found in the five dedicated pump stations constructed to allow Twin Cities Concrete Pumping (TCCP) to perform its work — pumping roughly 95% of the concrete on the job. The dedicated areas, according to Lehman, were something of a departure from the norm.

“Because the site is surrounded on three sides by existing structures and a restricted park roadway on the fourth, access into and out of the site was limited to just one point,” he said. “That made the task of establishing areas from which concrete could be pumped necessary. So, we designed and built ‘pump stations’ in strategic locations around the perimeter of a temporary earth retention wall system we’d erected. At each of these pump stations, we welded steel beams horizontally across the top of the retention system’s vertical piles, providing an engineered place for the pump’s outriggers to safely set. Because of the downward pressures on the soil, no pump any larger than a 55-meter unit could be used, but we could now utilize every inch of the site and ensure that TCCP’s trucks could effectively reach as much of the structure as possible.”

Once the foundation was completed and backfilled, Ryan pulled the retention system but chose to keep three of the five pump stations intact. The logic was that, given the limited workable area, TCCP could still use them for its concrete pumping operations. With the area backfilled and soil pressures to the foundation reduced, however, TCCP was now free to move up to a 61-meter S 61 SX pump to place the 8th floor of the podium.

Productive to the Core
For all the podium-level pours, pumping duties at the Eleven site have been shared between a regularly-changing lineup of truck mounted pumps — sized from 31-meters to the aforementioned 61-meter unit — and a Schwing S 39 SXD 39-meter detachable placing boom. The latter, mounted atop a DOKA self-climbing core formwork system, rises about 12-feet every five to six days, tackling pours for, in addition to the 7,000 cu. yd. core itself, the structure’s tower slabs, columns, and a 30” thick, 900 cu. yd., fin-shear wall that will rise to Level 29 and provide added structural stability.

“Being able to use a combination of the placing boom and truck mounted pumps has been key because of the obvious site constraints,” said Lehman. “For example, some of the tower’s south and east sides can still be reached by TCCP’s 55-meter pump, so it’s handling that. But we are not able to reach the north side of the tower with the trucks, so we’re pouring that using the placing boom. And, of course, once we get into the areas of the tower above Level 8, the 39-meter detach placing boom will be the sole unit at work all the way through to the top.”

One other notable addition to the equipment lineup also played a key role in keeping productivity up in the early phase of the project. According to Keith Larson, TCCP’s operations manager, at the same time that the core pad was being constructed, excavation, drilled piers and temp retention system work was also taking place around them, prompting a change in strategy.

“In order to avoid impacting Ryan’s ongoing excavation and caisson drilling operations, we decided to augment the 55-meter pump we had on the west side of the core with a 39-meter pump on the east side. Because it was considerably farther from the core, we ran 220-feet of slick line from it down and into a Con Forms 18-meter Spider placer set up alongside the core pad. It gave us the added reach we needed to make the pour and allowed Ryan’s operations to proceed on pace.”

No Space — No Problem.
TCCP’s truck-mounted pumps tackled pours for the mat foundation, pile caps, foundation walls and most of the podium structure. According to Larson, the type of pump used throughout the podium construction was often dictated by the task at hand. He cites the use of a S 31 XT, which features a five-section boom and an unfolding clearance of 18’ 8”, as a great case in point.

“There were areas of the podium — pouring the post-tension slabs for example — in which a regular pump would not have worked as well for us,” he said. “The S 31 XT was great for ‘knifing in’ between the deck levels to do the inner area pours without the need for much slick line at all. Similarly, the lack of available space on site — particularly on the south side — has made the use of the EASy Flex system on the 55-meter pump invaluable. Having the outriggers fully extended was simply not an option for us. With the EASy system, however, we were able to significantly reduce one side of the outrigger system, yet still use the boom in an almost normal working range. Doing so allowed us to pump from within a 25 ft. area — sometimes smaller. It was a lifesaver.”

He added that, in a couple weeks, they will be focusing on pouring post-tensioned slabs up to 16” thick on Level 8 of the podium — the amenity level. Because of the heights and distances involved, they will be benefiting from the reach of their 61-meter unit. “Essentially it’s about having the right tool for the right job.”

Take it for Granite
Compounding the challenges faced by Ryan and TCCP as they move upward are a number of mix designs that offer everything from ultra-high strength to an abnormally high level of abrasion.

“The design for this project calls for a mix that is just a beast for pumping,” said Larson. “It has a low water to cement ratio and the aggregate component of the design — granite — is very abrasive in nature. The core and most of the columns are a 12,000 p.s.i. mix design — also not ‘standard.’ But we’ve pumped material like this before and have no doubts that our equipment is more than up to the task.”

He added that the project has been aided tremendously by the degree of cooperation between all the key players on site: Ryan Companies, Schwing America, TCCP, Con Forms, etc.

“This job, because of what we’ve encountered thus far — the access issues, combining the functionality of the rising form system and placing boom, handling the mat pour with limited access, etc. — has brought out the best in everyone,” he said. “We’ve never been at a loss for support whenever we needed it; that’s a nice feeling to have.”

Level Best
Currently approaching the uppermost portions of the podium construction, Ryan Companies is gearing up for the last round of specialty pours before moving on to the tower facet of the job. According to Lehman, the 8th floor podium will present its own set of challenges.

“This part of the podium has a significant amount of 90” deep, 40” wide post-tensioned beams, needed to support the pool, spa area and amenity spaces offered at that level,” said Lehman. “It also contains some of the larger columns and thickest slabs on the project, which is where TCCP will put its 61-meter pump to work. Then, as we continue to climb upwards, we’ll have our hands full managing the mix designs to maintain pumpability, consistency on deck and in the forms, as well as adjusting to ambient temperature conditions, wind, etc. That all plays into our ability to safely, efficiently and effectively pump concrete at the heights that we’re going to reach on this project. And we’re definitely up for it.”

While the new development’s address — 1111 West River Parkway — is the obvious source for its name, one can’t help but see a numerological link as well: Ryan’s expected turn-over date for the job is 2/22/22. 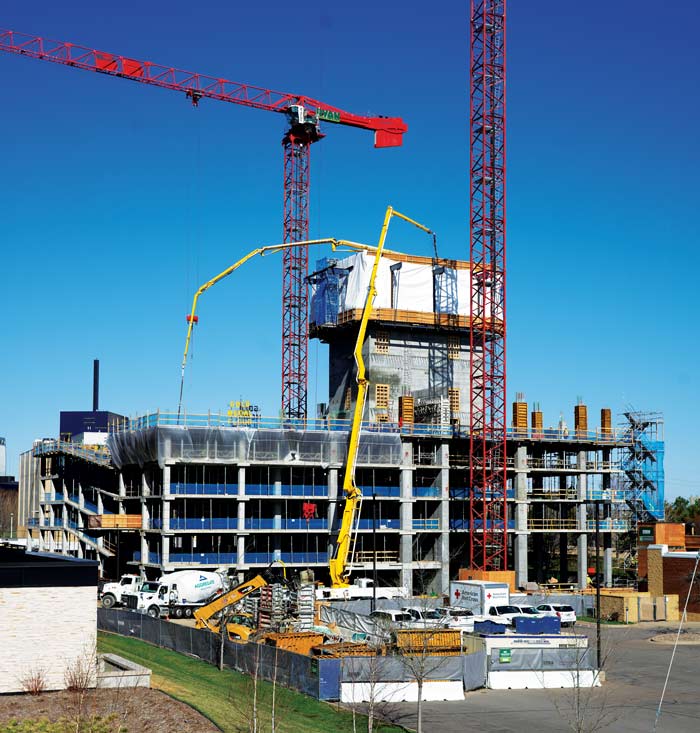 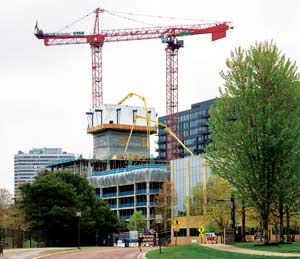 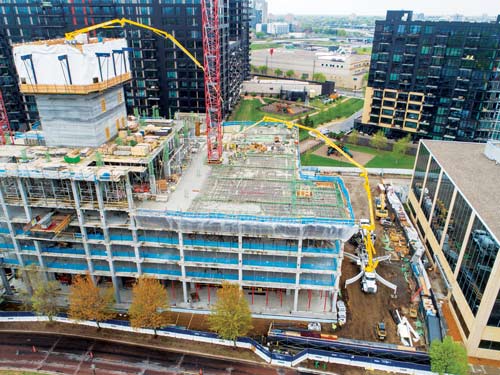 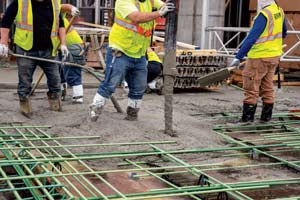 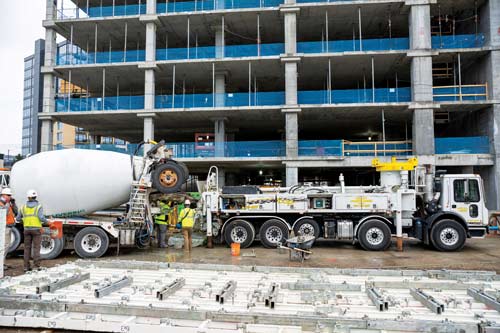 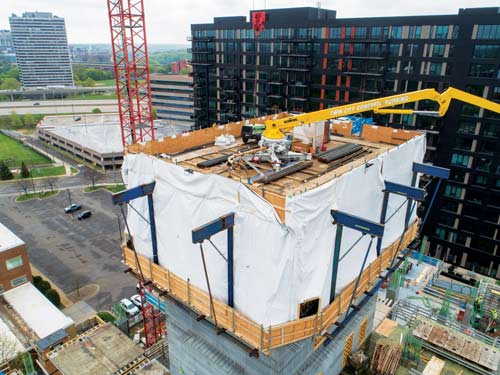 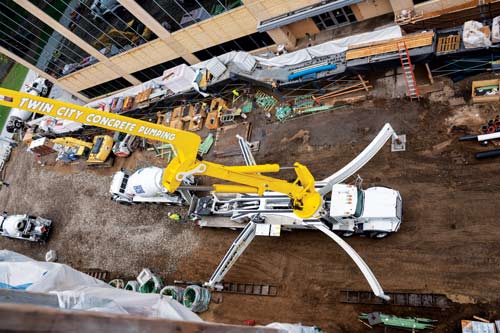