When working on two combined-cycle power plants, it is important to get the equipment necessary to finish the job efficiently, effectively, and safely. Located in Illinois, Jackson Generation Energy Center and Three Rivers Energy Center have both required several specialized pieces of equipment to complete the jobs.

Three Rivers Energy Center and Jackson Generation are natural gas-fired combined-cycle power plants. A combined-cycle is a power plant which uses both a gas and steam turbine together to produce 50 percent more electricity from the same fuel than does a traditional simple-cycle plant.

WORKING AS A TEAM

Several pieces of equipment were used to complete the project. The Loop Belt played a major role in both concrete and stone placement. However all of PCP’s fleet worked on the project including: 20M, 32M, 39M, 48M, and 58M boom pumps.

Mike Rogers, the placing foreman of Kiewit Construction said that the utilization of a Schwing Loop Belt along with boom pumps was a key factor in completing the job. “We encountered numerous applications where the Loop Belt made a big difference,” Rogers says. “It has an extremely long reach for a truck- mounted conveyor boom and it allows precise placement underneath the overhead structures, often placing machine pads, footings, walls and slabs in one or two setups.”

Rogers also mentioned that the expertise brought by Brian Parker of Parker Concrete Placement was a great asset to the project. Parker said that the use of the Schwing Loop Belt LB 40 significantly improved both concrete and material placement. “On the Three Rivers job specifically, we realized that the Loop Belt is great for placing concrete, it’s a third faster than pumping, if not more. The Loop Belt has deep troughed 20" belts which carry 40% more material than 18" belts. On lots of days we placed concrete on 5 different pours and placed stone as well. The belts not only move concrete or material very quickly, but they set up and move to different locations quickly too." said Parker.

Rogers added, “There was a lot of rock on the job, which is why we needed conveyor placement.” He also highlighted the difference between working with dirt and rock. “If it’s a dirt job, we will have better access to go in and pour concrete without having to wait. But with the rock job, we opened the whole thing at once. This is what drove the need for long reach conveyor placement.”
Rogers and Parker seemed to collaborate well together. “Mike is one of the most skilled placement foreman I have ever worked with,” said Parker, referring to Rogers’ use of the boom pump and Loop Belt combination.

Rogers also explained how working with PCP made things go smoothly. “We were very impressed with them. They made their entire fleet available on short notice. This made the job go so well for us,” said Rogers.

Three Rivers and Jackson Generation were both time-sensitive projects, according to Rogers. “When we get into bigger foundations, the belt can really help a

pump. As fast as you can discharge off a truck, the Loop Belt can keep up. The belt is nice to fill. " We often used the pump to top off while the belt placed the bulk of a slab or footing." He added, “You want to get those trucks loaded and unloaded as quickly as you can. The belt was great because it moved concrete so much faster. Parker’s Loop Belt was wider than a standard belt, so it can carry a lot more material.”

These were both demanding concrete placement projects. Very tight schedules and long hours. Both Rogers and Parker powered through the jobs in Ellwood and Morris, and look forward to seeing them up and running and powering the state of Illinois. “We are excited for those to be completed later on this year,” said Rogers.

The Three Rivers combined-cycle facility is expected to generate enough electricity for approximately 1.25 million U.S. homes, while the Jackson Generation facility is projected to produce enough electricity for 1.2 million U.S. homes, according to NS Energy Business. Between the two power plants, the construction has created about a thousand jobs for the surrounding communities. The goal of the power plants is to deliver a diversified state-of-the-art power grid within the state of Illinois. Combined-cycle power plants are flexible enough to start and shut down quickly to meet rapidly fluctuating energy demands. 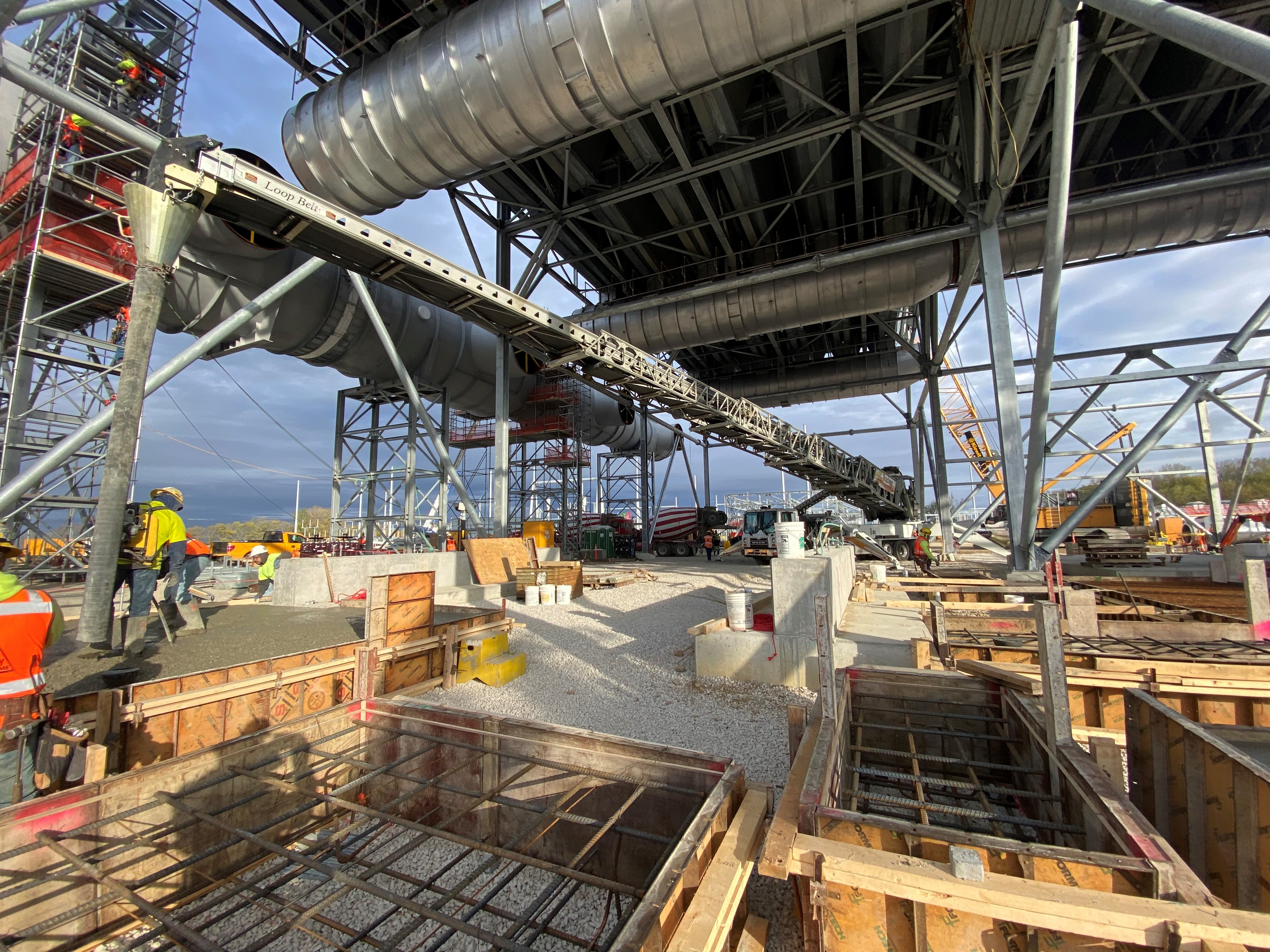 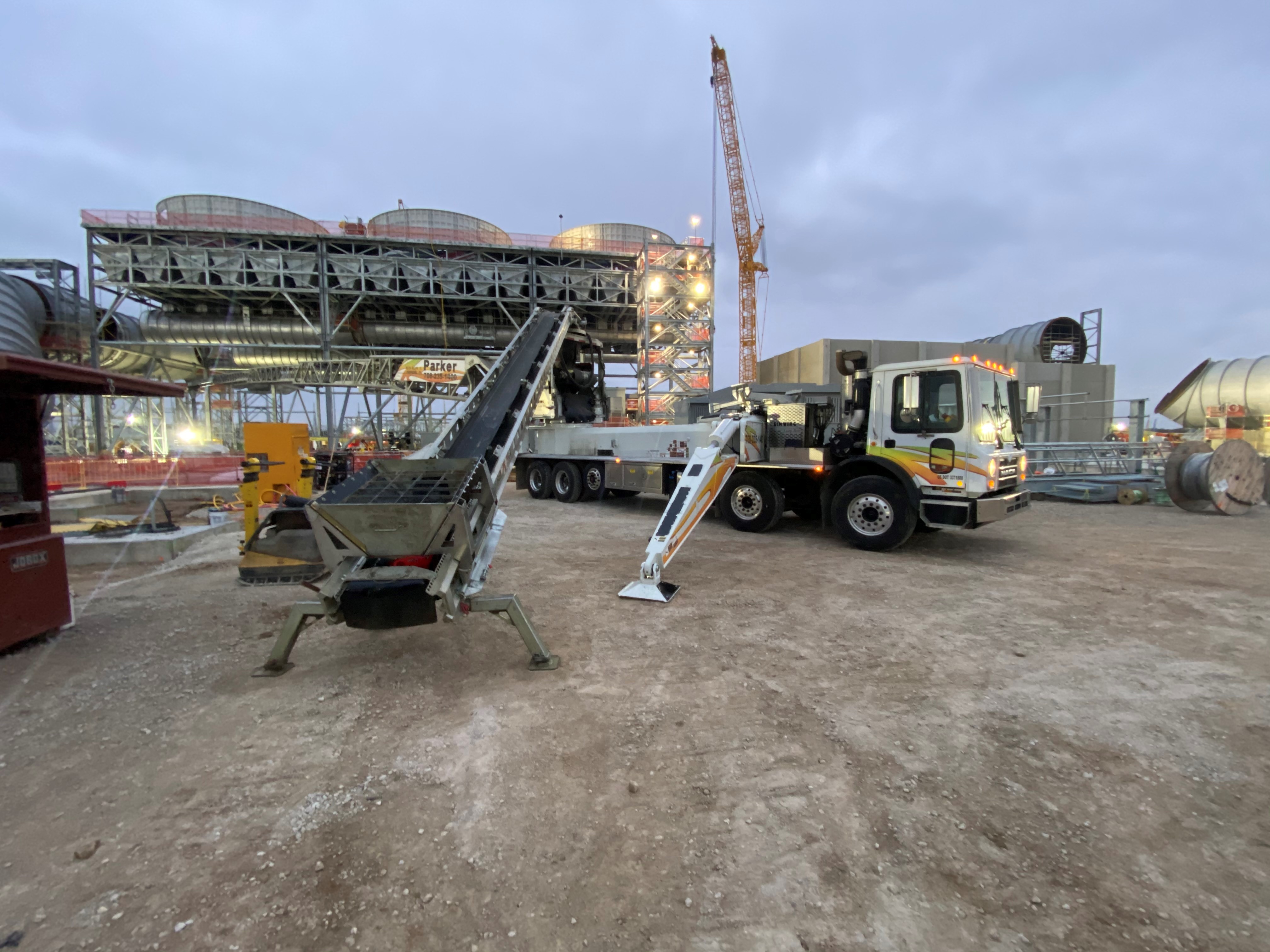