To paraphrase a time-worn adage: there are three things in life that are certain: death, taxes and development in Texas. The latest proof of that is a 35-story, nearly 800,000 square foot architectural gem taking shape in downtown Austin’s blossoming Waterfront District. When complete, the Pelli Clarke Pelli-designed structure will house more than 5,000 office workers, ground floor retail space, and enough parking to accommodate it all. Bringing the concrete and steel structure to life is the focus of general contractor DPR Construction (Redwood City, Calif.) and its pumping subcontractor, the Austin branch of Western Concrete Pumping (Vista, Calif.). Utilizing truck-mounted boom pumps in the project’s initial phase, then shifting gears to a Schwing S 39 SX pump with detachable placing boom powered by a Schwing SP 8800 stationary pump, the new structure is well on its way to dramatically altering the Capital City skyline.

Logical Choice
It should come as no surprise that Austin would be an attractive expansion target for major global businesses. U.S. Census Bureau estimates show that the south central Texas city is one of the top destinations for migrating talent, and the area population as a whole, has shown an impressive 26.3% increase for the 2010-2018 period. What is a bit out of the ordinary is that the new facility is being built on the former site of the Thomas C. Green Water Treatment Plant. Decommissioned in 2008, the plant was demolished shortly thereafter, leaving the site to sit empty for more than a decade, awaiting the right buyer. According to Josh Cox, Western CP’s general manager in Austin, apparently the developer, Trammell Crow, has found the right buyer.

“Companies have been drawn to the Austin area for some time now, so it would seem that whoever is leasing this campus also shares a belief in the area — and on a very big scale,” he said. “They broke ground on Greenwater Block 185, as it is called, in March 2019 and we made our first pours shortly afterward in October.”

Mat Finish
While Block 185 will be encased in an aluminum and glass curtain wall, behind that curtain it will be essentially all-concrete. Offering six floors of underground parking, work began with a massive excavation effort that saw DPR’s haul trucks remove roughly 137,000 cubic yards of soil to create the 65’ deep foundation footprint.

“Our first pours were smaller ones for footers and piers in advance of the large slab-on grade,” said Cox. “The 276’ X 203’ slab contained more than 13,000 cubic yards of concrete and varied in depth from 10’ thick under the core, to 8’ in most areas to 4.5’ at the outer perimeter. It was also heavily reinforced with more than 2,068 tons of rebar, much of which was as large as #11 bar. Limited by access to just a trio of pumps, including 56-meter, 58-meter and 61-meter models, we poured the first half of the mat, then cut back to just two units to complete the job.”

Concrete supplier Lauren Concrete (Round Rock, Tex.) brought 120 trucks to bear for the Block 185 mat pour, delivering more than 1,200 loads to the site. A mix design utilizing 50% fly ash was selected to improve strength and reduce the heat of hydration. While access for the pour was very tight — only two sides, one of which was an active city street — existing soil conditions made things even more challenging. Despite an abundance of tie-backs, Cox said that soil pressure concerns forced them to adjust their pumping regimen.

“Even with all those tie-backs in place, when we were pumping with the 61-meter pump, we were still required to maintain a distance of 19’ off the edge,” he said. “And that was with substantial cribbing in place. But we managed just fine and moved on to the next phase which, like the balance of the project, would be centered around use of the 39-meter placing boom.”

Boom Times in Austin
One of the largest concrete pumping companies in North America with more than 120 pumps, Western CP is certainly no stranger to the innovative use of available equipment. So, when considering how to best pump the more than 8,000 cy for the 55’ X 39’ core, as well as the columns, walls, and slabs for each floor, they literally rose to the challenge. The solution, according to Cox, was found in utilizing the 39-meter placing boom to its fullest.

“We saw the Block 185 project as essentially two separate jobs: work on the north section which contains the core and surrounding areas, and work on the south which represented the balance of each level,” he said. “To maximize efficiency of pumping to all areas, we installed a Schwing 40-foot octagonal mast in the south area, then mounted a cross frame on a core lift system on the north side. Using DPR’s tower crane, we simply fly the placing boom between the two locations as needed — it’s been the perfect answer for us.”

The octagonal mast to which Cox referred is a Schwing self-jacking unit, designed for both high-production and ease of use. Complimenting it with the S 39 SX detachable boom has proven an ideal match for Western. Part of the Generation 2 design, the boom’s weight has been reduced dramatically, coming in at under 13,000 lbs. That, coupled with its simple four-pin mounting configuration and quick-disconnect feature, has allowed the boom to be flown quickly between locations at Block 185. The solution in place at the structure’s core is a hydraulic self-climbing system that raises the formwork — and placing boom — vertically without relying on the use of a crane for each vertical lift.

“Up to this point, the boom has been moving every two weeks or so,” said Cox. “In the past, being confronted with a job site layout like this would have meant committing to two separate booms. This is a much better, more economical solution and it’s been working out great for us.”

Concrete Workhorse
As might be expected, concrete volumes for the Block 185 project are as impressive as the design itself. On each of the non-parking ramp floors, the placing boom is pouring 60 columns that range in size from 24” x 24” to 84” x 48”, a variety of different sized post-tensioned beams, slabs measuring between 8” and 12”, and the 32” thick walls of the core which, in this layout, will house the elevators, stairways and a breezeway.

“That boom is the centerpiece of this operation, there’s no doubt about that,” said Cox. “We added 40 feet of system onto the end of it and we are getting to every area on the site from either of the two locations — that’s been ideal. DPR has targeted production rates at about 25,000 sf per weeks and we’ve been getting that and more. However, we wouldn’t be getting the production we are without the power behind it — for us, the SP 8800 stationary pump. That unit has been our go-to pump for all of our placing boom work around Austin and it continues to impress us. Since we got off the mat, it has been a workhorse for us, and it will probably do about 85% of the 90,000+ yards this project represents. There have been instances when we’ve brought in the 61-meter pump for a slab pour or two, but those have been few and far between.”

Lauren Concrete has been providing product to the Block 185 site from two ready mix plants located about 35 minutes from the downtown Austin location. To eliminate the risk of downtime, they also have a pair of plants designated as backup facilities for the project.

Designed for Efficiency
Coming from the minds of “Starchitects” Pelli Clarke Pelli, who count in their portfolio the Petronas Towers (Malaysia), the World Financial Center (NYC) and the recently-completed Salesforce Tower (San Francisco), one would hope that Block 185’s final look will turn heads — and it does not disappoint. Looking very Kuwait-like, a side view of the structure calls to mind a gigantic boat’s sail, while the front view offers a series of receding levels, each boasting impressive greenery. Though that facet of the design was largely driven by a need to meet the city’s setback requirements, it also plays nicely into Western’s pumping plans as the project progresses.

“As the upper floors of the structure recede and decrease in size, the square footage obviously also decreases,” said Cox. “There will come a point at which we will be able to access those entire upper levels using only the boom on the core form lift system which will benefit us nicely. We are still in the early phases of this project, but we’ve been very pleased with the way things have come together so far. This will be an iconic building in downtown Austin and it’s great to have played such a huge role in making it happen.” 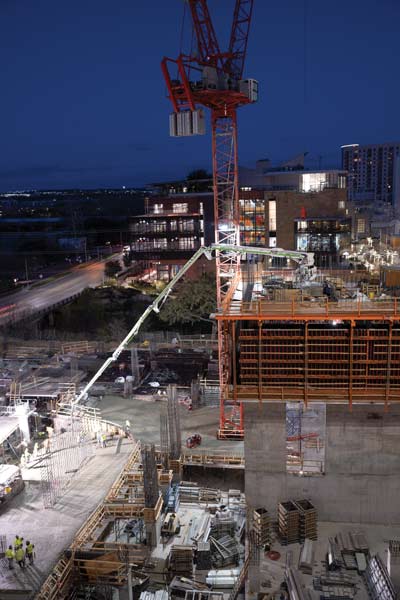 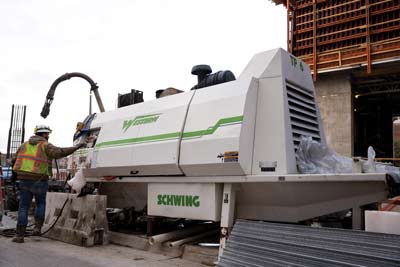 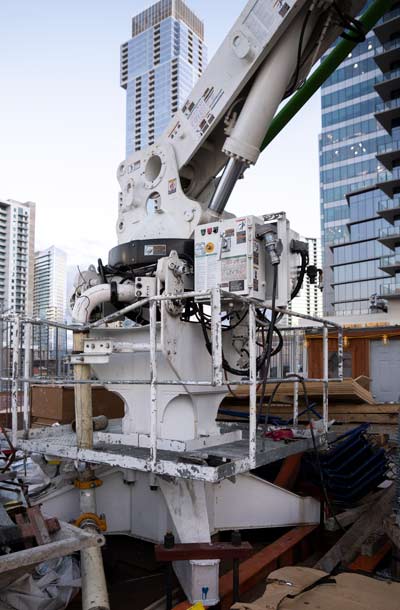 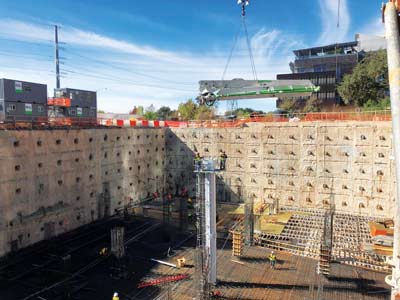