Brad Jensen founder and owner of , Jensen Concrete Pumping & Services, sees himself as a traditional concrete pumping professional. And the tagline of his company: “Serving All 10,000 Minnesota Lakes’ Concrete Pumping Needs,” reflects that. However, during one particular week — one full seven-day period — Jensen puts on his specialty concrete pumping hat and does so in a huge way. During that challenging week, Jensen CPS becomes the concrete pumping company of choice for the X Games which, for the last three years, have originated from US Bank Stadium in downtown Minneapolis. Shotcreting with a Schwing SP 1000 trailer pump and using a skill set that continues to grow with each annual session, the company played a key role in transforming the Minnesota Vikings’ home turf into what, for four days, became the center of the skateboarding, BMX and Moto-X world. Jensen’s work helped bring the event to life — and score big points for “cool” with the teenage children of some of his employees. A medal-winning performance, indeed.


Let the Games Begin
To the uninitiated, the X Games are an annual event that showcases highly skilled athletes in the extreme sports mentioned above. Owned and produced by ESPN; the X Games have steadily grown in popularity since their introduction in 1995 (total on-site attendance for last year’s games was 119,000); offer both summer and winter competitions; and have proven a viable, bankable commodity for the owners and sponsors alike. As one might imagine, getting a facility like US Bank Stadium prepped for each year’s event is no small task. And it’s made even more challenging by the fact that some events — and the features needed for them — change from year to year. According to Jensen, they worked alongside a company called California RampWorks, which heads up the X Games’ course design and construction.

“The crew from CA RampWorks is a phenomenal group of people to work with,” he said. “It’s amazing to see the transformation that takes place over the course of one week of intense effort. We work as the concrete subcontractor to them and have been doing so since we were first contacted for the 2017 Games. At that time, though we had shotcrete experience doing things like walls, pools, and small construction projects, we’d never done anything of this scale. But we love a challenge, we were grateful for them believing in us, and took it on.”

Things have apparently gone well since that first contact. The customer was pleased with the results and Jensen has been providing its shotcrete expertise every year since then.


Needing CPR
From a strictly a job-size perspective, Jensen’s role in the X Games build might seem minor. After all, the entire project only involved application of 155 yards of concrete material. As it turned out, even getting that modest volume down was not without its initial challenges.

“This has been an extremely busy year for us,” Jensen said. “So, we had our regular trailer pump booked for the entire time X Games needed us to do their work. As a result, we had to do some last minute scrambling to secure a replacement. But the folks from Schwing and their CPR (Concrete Pump Repair) Division in North Branch, stepped up to rent us a mint-condition SP 1000 trailer pump. Not only was that a life-saver for us, it also gave us an opportunity to see some of the features built into that newer model. Two of those — smoother hydraulics and an electric stroke limiter which controls material output directly from the remote — came in handy on the X Games job.”

Helping Jensen out of a bind was a pleasure for Jerry Anderson, CPR’s vice president and general manager. “I’ve known Brad since he started out in this business a few years back and really like him,” said Anderson. “So, when he came to us, I knew what pump he was currently using and knew exactly what we could do for him in a rental. We had a 2018 unit in inventory that had only been out on one job; it was as close to new as you can get. We set him up with a short-term rental agreement and he was on his way. I like to see these younger guys building their businesses and was glad to be able to help.”

No Walk in the Park
That trailer pump was, in fact, the centerpiece of the entire shotcrete operation at X Games. What the job lacked in volume was more than made up for in the unique nature of the work, starting with a pair of features called Skateboard Park and Skateboard Street. Need a mental image? Picture your neighborhood skateboard park on steroids.

“Essentially these were two separate huge bowls — not unlike swimming pools,” said Jensen. “For the sides, CA RampWorks’ carpentry crews first created a wooden skeleton which tapered from the floor of the structure to the top, then they screwed 1/8” plywood to it to create the signature bend. With that in place, they attached wire mesh and it was ready for the shotcrete. Other areas utilized pre-manufactured bent pipes — created to the angle they need any particular ramp to be — which also got the plywood and mesh treatment before we went to work with them.”

It’s not surprising that shotcrete is the technique of choice for CA RampWorks for this and all the other extreme sport venues they create worldwide (among their portfolio is work in Australia, Russia, China and more). Going that route requires less formwork, provides the strength and durability needed, and can be installed much quicker than using form-and-pour construction. Using about 200’ of 4” hose with the trailer pump, Jensen CPS was able to access all the areas they needed inside US Bank Stadium.

“That pump did an outstanding job for us,” said Jensen. “The shotcrete operation was smooth and consistent — we couldn’t have been happier.”

Racing to the Finish
Jensen said that their mix design was heavy on sand and Portland cement and they tried to get the material down as smoothly as mechanically possible. However, he added that the final, skateboard-ready product is the result of a dedicated, talented screeding/finishing crew which followed them.

“These guys were impressive to see in action,” he said. “They seem more like artists than laborers, taking our rough work and turning it into something the pros can skate on.

Concrete for the project was provided by Marshall Concrete Products which had a batch plant set up nearby. For seven days straight, at 7:00 a.m. and 1 p.m., one truck would deliver 9-10 yards of concrete to us inside the stadium.”

Jensen feels it’s important to note that Marshall was very accommodating to that weekend schedule, saying: “I’m fairly certain that many other suppliers wouldn’t be so keen to opening up on Sunday.”


On Their Game
Although Jensen CPS has done its share of unique projects in the past, Brad Jensen feels the X Games work definitely affords them bragging rights as something of a specialty concrete pumper.

“The volumes might not reflect it, but that was still a challenging project; you have to be on your game and know what’s going on at all times. You have one chance to get it done right — there is no time for tear-outs or re-dos We wrapped up done on Sunday and they needed to have everything finished, painted, cleaned and prepped for the Thursday opening. I’m grateful for the help I got from Schwing and CPR, loved the performance I got from the pump, and was glad, once again, to have been a part of such a cool cultural event right here in the Twin Cities.” 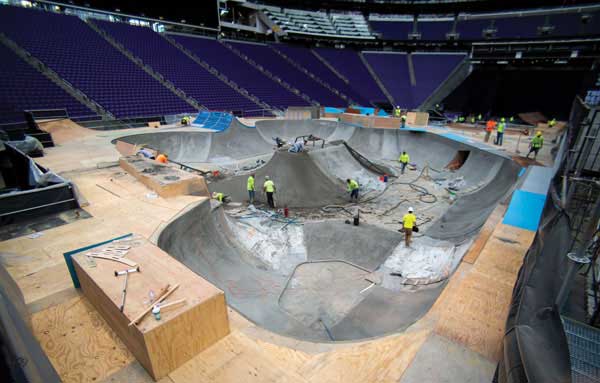 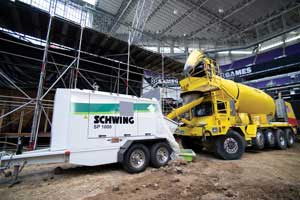 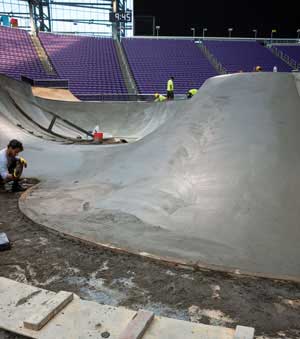 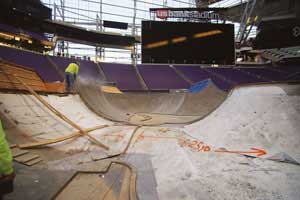 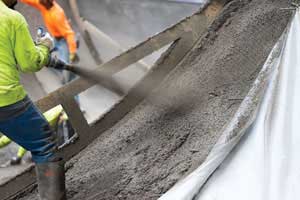 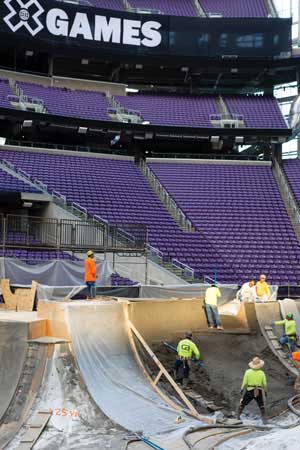