Capping Off a Problem

It was one of those projects where size — or the lack of it — really mattered. And ultimately proved to be a case in which good things really did come in small packages. Tired adages aside, on a project to repair a 55 year-old bridge in South Carolina, general contractor TIC -The Industrial Company (Savannah, Ga.), needed a pump that would meet newly-instituted bridge weight restrictions, fit into a setup profile that was little more than a car-lane wide, and yet be versatile and compact enough to reach down below the decks to the pier caps where the repairs were taking place. Enter Cherokee Concrete Pumping and a Schwing S 20 pump which met all the challenging criteria above, turning what could have been a nightmare project into a study in efficiency. At the risk of citing yet one more axiom: it truly was “the right tool for the right job.”

Scouring for Solutions
Situated at almost the southernmost tip of South Carolina, Fripp Island is a popular vacation resort destination located roughly 15 miles from its better-known counterpart, Hilton Head. Traffic access to the island from neighboring Hunting Island — roughly 900,000 vehicles per year — is made possible via the Fripp Inlet Bridge which carries U.S. Route 21 over the inlet. Built in 1964, the 2,067 ft. long structure has been undergoing periodic upgrades since the 1980s, particularly efforts to bolster the structure’s piles. According to Ben Williams, TIC’s construction manager, the latest project involved addressing a dozen such problematic elements.

“This job started in August of 2019 and was focused on several of the structure’s piles which had been suffering a good deal of ongoing scour,” he said. “Because scouring can threaten the stability of the piles and, by extension, the integrity of the bridge itself, it was decided that piles on 12 of the bridge’s bents needed work.”

According to engineers involved with the project, because of channel scour from recent storms, it was felt that the existing piles did not provide adequate support to safely carry the expected traffic loads. Retrofitting the bents would accommodate additional piles that were driven deeper than the original ones in order to provide the necessary structural support. The design also anticipated future scour to help extend the service life of the bridge. Due its age and the reduced capacity of the existing bents, engineers felt it was better use of existing funding to retrofit the bents. While the fix seemed a simple one, bringing that solution about would prove to be anything but.

Weight Watchers
Posted load limits on the Fripp Inlet Bridge, like others in the area, are generally 27 tons. After the structural analysis, those limits were reduced to 21 tons to avoid further damage to the structure. Doing so, however, affected concrete delivery, limiting each ready-mixed truck to no more than six yards in order to stay below weight constraints.

“That was just one of the challenges presented to us at the outset of the job,” said Williams. “We were fortunate that we were able to work off the bridge itself, rather than having to barge the pumping equipment and concrete to each area, deal with changing tides, and so on. But working off the structure itself meant closing one lane of a two-lane bridge. It also meant having to position a pump in an area that was little more than the width of one traffic lane and a small shoulder.”

In addition, TIC would need a pump capable of working in that tight area yet still provide access to the caps being poured below deck. Even though the project was originally bid with bucketing the concrete in mind, project superintendent Ryan Hruda decided to look for an alternate, more efficient approach and worked with Leon Crumley, Cherokee CP’s Savannah/Charleston branch manager, to find a pump that could answer all their demands. They got it in the small but powerful 20-meter pump.

Friends in Tight Spaces
By nature of its very design, the 20-Meter Schwing boom pump Cherokee brought to bear at the Fripp Inlet site proved ideal for the tasks at hand. Not only was its 39,600 lb. gross weight well below the bridge’s posted 21-ton load limits, the single lane restriction was easily met by the unit’s compact (12’ 8”) front outrigger configuration.

“Because of that, we could easily set up in the closed lane, boom off to the side and come in under the deck to the formwork for the new caps,” said Hruda. “It was extremely tight under there, so the fact that the boom had a four-section double Z-fold configuration really played to our benefit. Mind you, these were pretty sizeable caps, each one measured 50’ 6” long (from transverse to the bridge), 7’ wide and 5’ 8” tall.”

To avoid miscommunication during the pour, added Hruda, the pump truck operator was able to come down onto the falsework with the concrete crew, yet still see up to his truck where TIC’s people helped with backing the ready-mixed trucks up to his pump.

“Obviously, we were not allowed to pump over traffic, said Hruda. “So, given that we had to go out, down and under the deck, there were some parts of the pour that were beyond the reach of the 20-meter pump. To deal with that, we had 30 feet of slick line that we would position on the forms to extend the reach of the pump. Each cap had roughly 71 cubic yards of concrete, so, even though it was a challenge we had a really good system at work throughout.”

Closer to Home
Concrete was supplied by Low Country Concrete, a ready-mix company based out of Beaufort, S.C. Though located only 12 miles away — as the crow flies — the trip from the plant to Fripp Island is nearly doubled to 23 miles because of the various inlets and waterways that dot the area. The trip, it turns out, would not be nearly as long.

“We were fortunate in that Low Country is also supplying concrete to another larger bridge project in the area — the Harbor River Bridge,” said Williams. “They set up a batch plant for that project and used it for Fripp Inlet as well. Not only did it shorten the distance drivers had to travel, it helped keep costs down on the job for us.

Because they were only able to haul six yards of mud at a time, Low Country used seven ready-mixed trucks for the Fripp Inlet job. Williams says that, although plans called for a 4,000 psi mix, they took it upon themselves to bump that strength up a bit.

“We went ahead and placed 5,000 psi on all the caps in order to be able to strip our falsework faster,” he said. “The mix design was fairly straightforward, with a slump of 4” to 6”. While we didn’t add any superplasticizer, we did use a retarder on some pours, depending on the time of day we got the mud, just to avoid the risk of cold joints. The 145 cubic yard per hour pump kit with 8” chrome material cylinders handled it all beautifully, laying it down in two-foot lifts.”

In Their Corner
Even on a project that is smaller than most — total volumes for the Fripp Inlet job were under 900 yards — the relationship between the general contractor and its subcontractors is key. Williams said working with Cherokee as a whole was a good experience, made even better by the lengths to which Leon Crumley went to ensure the project’s success from a concrete pumping perspective.

“Leon and Cherokee were great to work with,” said Williams. “We threw some situations at him that I’m sure were frustrating at times, yet he always managed to accommodate us. Case in point: there were several points at which that 20-meter pump obviously became a popular item with Cherokee’s other customers, and Leon had to go to bat for us to secure it.”

He added that, while they did have the luxury to push their pours out a bit as long as they had other caps to work on, when the project was in its final phases, that fallback position was removed.

“We were getting ready to pour the last cap and had no other work to turn to, when we found out that someone else in Atlanta tried to book the 20-meter unit,” he said. “But Leon pulled some strings to make sure we got it that day. That meant a lot to us and obviously having access to that pump helped keep things on track. It was a very nice project.”

Work on the Fripp Inlet Bridge wrapped up and opened to two-lane traffic in April 2020. 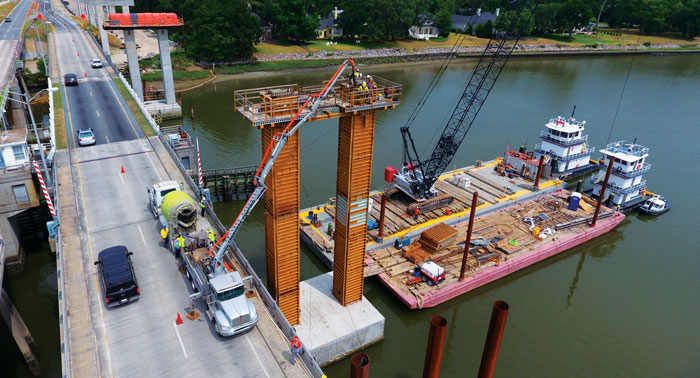 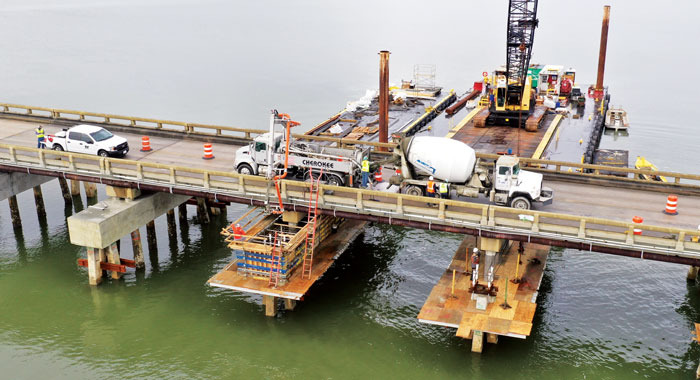 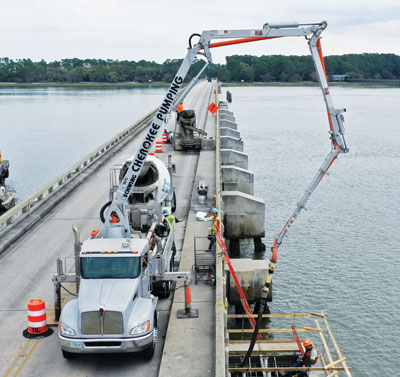 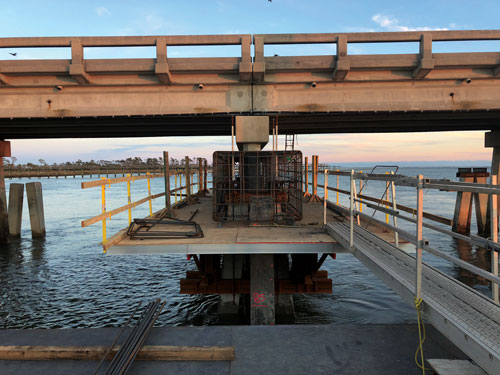 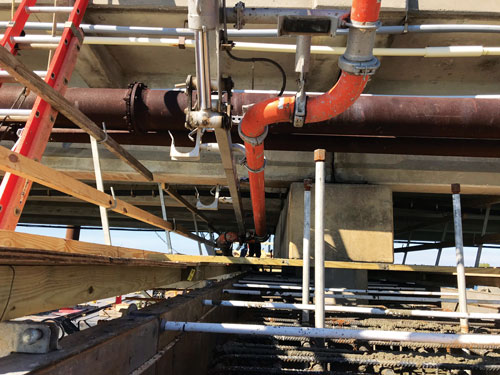