In 1977, Gary was in a trades class in college where he met a good friend that owned a construction company while in school. Gary immediately took interest in the construction work his friend presented to him and decided college was no longer the path he wanted to take.

“I decided to quit and go work for my buddy in the shotcreting business,” said Brown. Gary quickly rose the ranks to become the superintendent of the company. One year later, the company went out of business, and he and his business partner went their separate ways.

“I went on to work for a large construction company in Indiana,” said Brown. They had a 32-story job they needed help with. I convinced them they needed to hire me for the job.”

This job introduced Brown to the McCoy family of RL McCoy Inc. in Indiana. Gary developed an excellent relationship with the family and helped them select and buy their first concrete pump.

Gary had worked various concrete pumping jobs until January 1st of 1994 when he got a call from the McCoy’s.

“They called me up and said ‘we have a surprise for you.’ They had a brand-new work pickup truck for me. ‘We want you to go work for us,’” said Brown.

Before they met Gary, the McCoy’s were primarily bridge builders. They needed help with a new pump from an experienced concrete pumper. And Gary was just the man for the job. According to Gary, Bob McCoy stood up on the pump for six hours while Gary poured concrete, showing him what they were capable of together.

“Bob looked at me and let me know that we were going to pump concrete from now on,” said Brown.

In the past Gary had issues with other pumps.

“When I set my feet up on that SCHWING and I pumped one-thousand yards on an industrial project, the pump performed without a lick of problems, and I sat there thinking ‘what a great machine.’ This is what I need to do the rest of my life,” said Brown.

In his line of work, he began to develop a fondness for the brand.

“SCHWING is people you trust. It’s a company you can trust. I’m a solid SCHWING customer growing up with them,” said Brown. His affinity for the brand dates back to 1979 when Gary attended their first sales program to learn to work one of their pumps. “They sold me on service, durability, and quality. When you’re in the business of service, you have to back it up with the quality parts and pieces.”

Philosophy on Parts and Maintenance

While having a wealth of experience in his career, through and through Gary has been a champion on quality parts and maintenance.

“I only use SCHWING parts because I know the durability is key. The quality is going to last. SCHWING makes it so you can plan your maintenance budget based on the quality of the part,” said Brown. In his experience discussing parts and maintenance with others in the business, Gary has always pushed reasons to spend more on quality.

“The labor and the downtime to replace certain parts, even though it’s cheaper is about as expensive, if not more expensive than the SCHWING part that you skipped out on,” said Brown. When a machine is down, Brown knows how downtime can hurt a business. “The time the machine needs to be running is absolutely critical. You only have a small window of opportunity. The customer will not wait on you, they will call someone else. Their schedule is as important as yours.”

The Importance of a System

Currently with RL McCoy, Gary oversees a new program that organizes and focuses solely on parts and maintenance.

“We built a completely new parts room for this project and we’re organizing everything right now,” says Brown. With this new system, a mechanic will be notified on which part needs attention. “We will stock a certain number of parts needed on the shelf and the system will have an automatic reorder through SCHWING to keep everything ready and replenished so that we never run out.”

The Standard You Set

Gary has been a board member for the American Concrete Pumping Association for almost 18 years. “I always try to improve safety throughout the industry,” said Brown. At RL McCoy, they pride themselves on equipment service and maintenance, but also customer service.

Proud of the Work

Gary is most proud of the work he did in the 1980’s that catapulted his career. The 32-story job was a major highlight for him. “It helped set the groundwork in Indianapolis to show that placing booms were capable,” explained Brown. “I helped them develop their placing boom market then.” 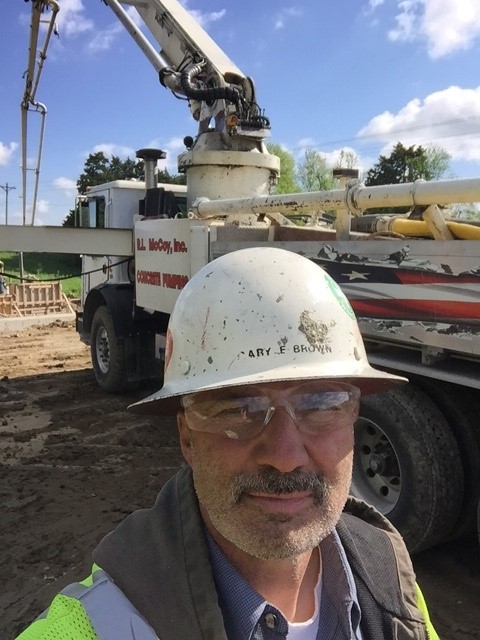